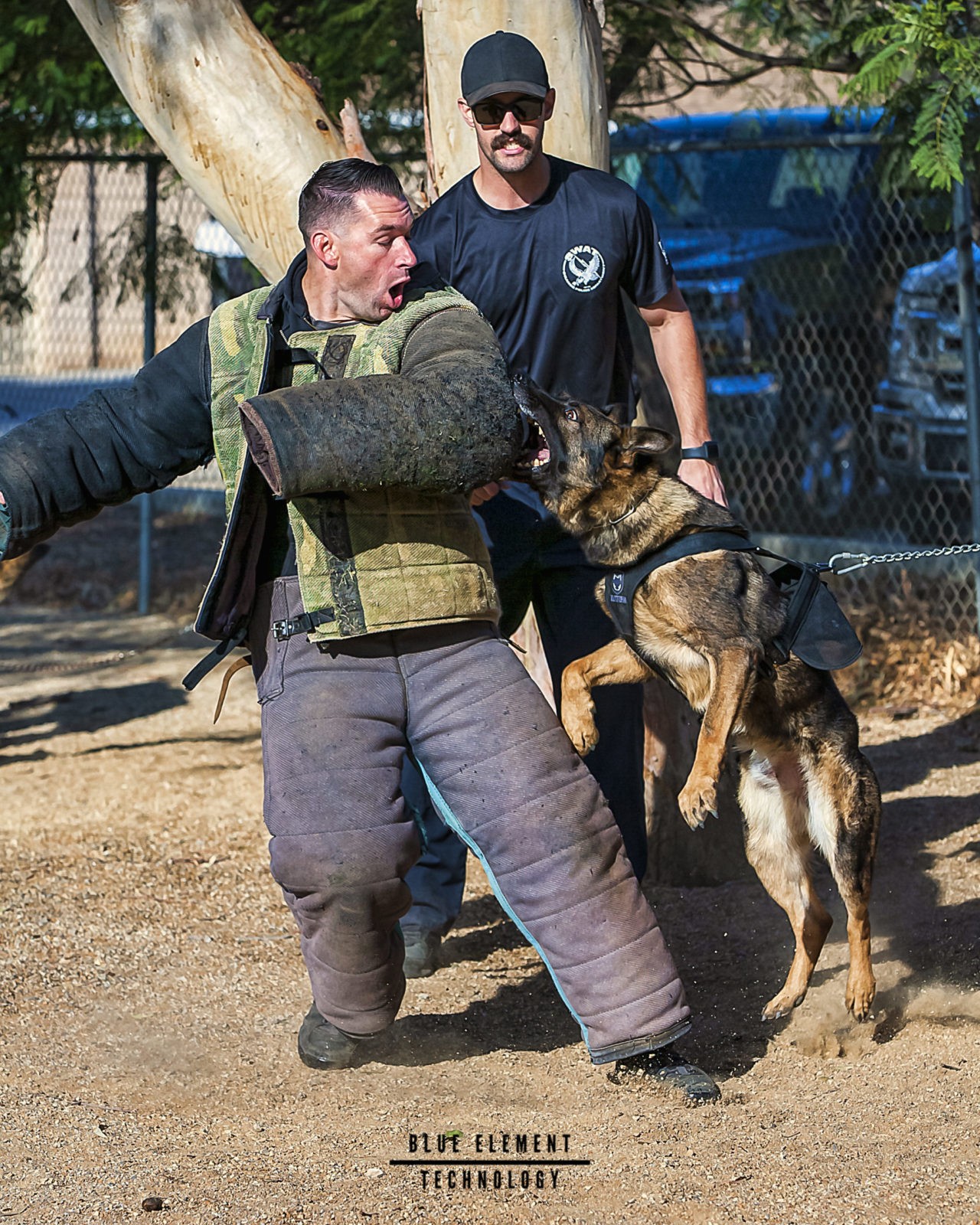 The concept of having a “clean out” has been accepted by virtually the entire police K-9 community. However, we still encounter handlers that feel their dog becomes stronger if they are choked off the bite. They soon develop a disobedient dog, not a stronger dog. Unfortunately, this seems to be a very popular technique to remove a dog from the bite. Most of the conflicts on the subject revolve around the methods used to accomplish a “clean out”. We must remember all conditioning of a dog’s behavior has to make sense to the dog for it to be effective. To accomplish that it is necessary to view all of our actions as the dog views it.

First & foremost the young dog is taught the out or release command by a skilled handler. It should be very clear in the dogs mind the connection between the order (release) and the consequences if he chooses to ignore the order.

Once again I refer to Pavlov. His interest in dogs was limited to an instrument to prove his conditioned stimulus response concepts. His early experiments led him to believe once a behavior is properly conditioned; it becomes a predictable pattern for as long as the conditioned subject is physically able to respond. He termed it conditioned stimulus conditioned response. As often occurs in our work Pavlov discovered he had to change what he had documented as science due to an unplanned, undesired incident.

Pavlov’s dogs were kenneled in cages in a basement in Leningrad during the great flood of 1924. Several dogs drowned and several almost drowned. During subsequent cs-cr experiments Pavlov discovered the dogs that almost drowned suffered from a suppression of the conditioned behaviors. This also led to Pavlov to “discover” four distinct temperaments present in dogs that very much affected how they responded to stress. While most are not aware of his definitions, we use them routinely to test and train dogs for our work. Basically they range from a softer, nervous dog to a very emotionally strong dog.

The correlation between what Pavlov discovered quite accidentally and choking a dog into submission should be apparent. In both cases a distinct survival mode presence is instilled in the subject. The result, depending on which of the four types of temperaments identified by Pavlov, could vary from memory erasure to a violent life and death resistance. The latter often resulting in the handler being bitten.

Next we can discuss timely corrections, or negative reinforcement.

First we examine how the electric collar is viewed from the dog’s perspective. The collar, used properly, can be very quick and effective. Similar to athletic endeavors our actions have to be more reflexive then reactive. Even though your dog’s reaction time from sensory perception to action can be 1/40th of a second they lack an element that we excel in, an intellect. We are smarter then they are. We can learn to read our dog and anticipate behavior. Even using electricity that travels 186,000 miles per second, our timing is critical.
The biggest problem with using electricity is that it is inanimate. Viewed again from the dog’s perspective: the dog is a pack animal. The pack relationship in our domestic dogs is a mutated form of what Mother Nature intended. Once weaned, a domestic dog prefers humans over its own species. We as dog handlers become pack leaders. A pack leader is the primary shaper of a dog’s behavior, both desirable and undesirable. When a behavior is taught or conditioned in a dog it needs to be continually reinforced. A successful pack leader properly dominates his dog, insuring compliance during training and deployment.

It cannot be emphasized too much how important that relationship is. When the direct human intervention is replaced by an inanimate object (electricity), a strong dog very quickly learns to “work through it” i.e.; he has no respect for the inanimate process. He has no pack leader to dominate him when it is necessary! A lesser dog on which the electric collar becomes the primary means of negative reinforcement could begin operating too high in defense. We have two types of defense, defense submission and defense aggression.  The former causes unsureness in the dog, the latter causes the dog to either fight through the “correction” or connects the “punishment” to the handler, causing an aggressive response to the passive handler. I use the term passive since he is not dominating the dog and the situation in a manner that makes sense to the dog.

The electric collar as a seldom used device, with a handler that understands the amount of force he must use to control his dog, and does it fairly and in a timely fashion, is an acceptable method of negative reinforcement. But continuous use and reliance on an e-collar will have an adverse effect on the mental and physical performance over the working life of a dog.
The last technique we will describe is probably the most controversial. That is using a skilled agitator to accomplish our goals of clean out.

One of our biggest enemies in the world of police dogs is attributing anthropomorphic behavior to our dogs. We cannot imagine a role playing suspect controlling the behavior of our dogs.
A trait we can attribute to our dogs is honesty. If they are confronted with a situation they do not understand, either from an external source or from us, they tell us immediately. Poor techniques from an agitator or a handler will be apparent by the dogs’ behavior long before a human critiques the performance.

To use a role player to modify behavior it is necessary to utilize one with skill. In this case describing a skill level can be somewhat arbitrary. If 10 is an excellent agitator and 1 is a rank beginner a skill level of at least 7 or 8 should be utilized for the task.

Using a skilled agitator can have several benefits above and beyond a “clean out”. Implementing techniques to develop confrontational behavior and beneficial defense aggression are primary. A skilled agitator will focus the defense aggression to him self. This in turn increases adrenalin flow over a handler administered, or an electrical
correction. Science tells us that what is learned while stimulated with adrenalin is retained far better then what is learned under less stimulating conditions.  To this end it is incumbent upon us to develop these “skilled agitators.”

The purpose of this article is to describe techniques; much more could be written and demonstrated on how to implement them.

The question now is which works best? Which is best for the relationship between the handler and the dog?

First & foremost, the handler should personally use the force necessary to out his dog. Always using negative reinforcement and never using punishment. Second is to use skilled
agitators. The higher the drive in the dog the better the agitator should be. Finally, a seldom used electric collar. Frequent use of the handler and skilled agitator  over the e-collar will instill pack leader dominance while preserving a trusting, controlled relationship between handler and dog.