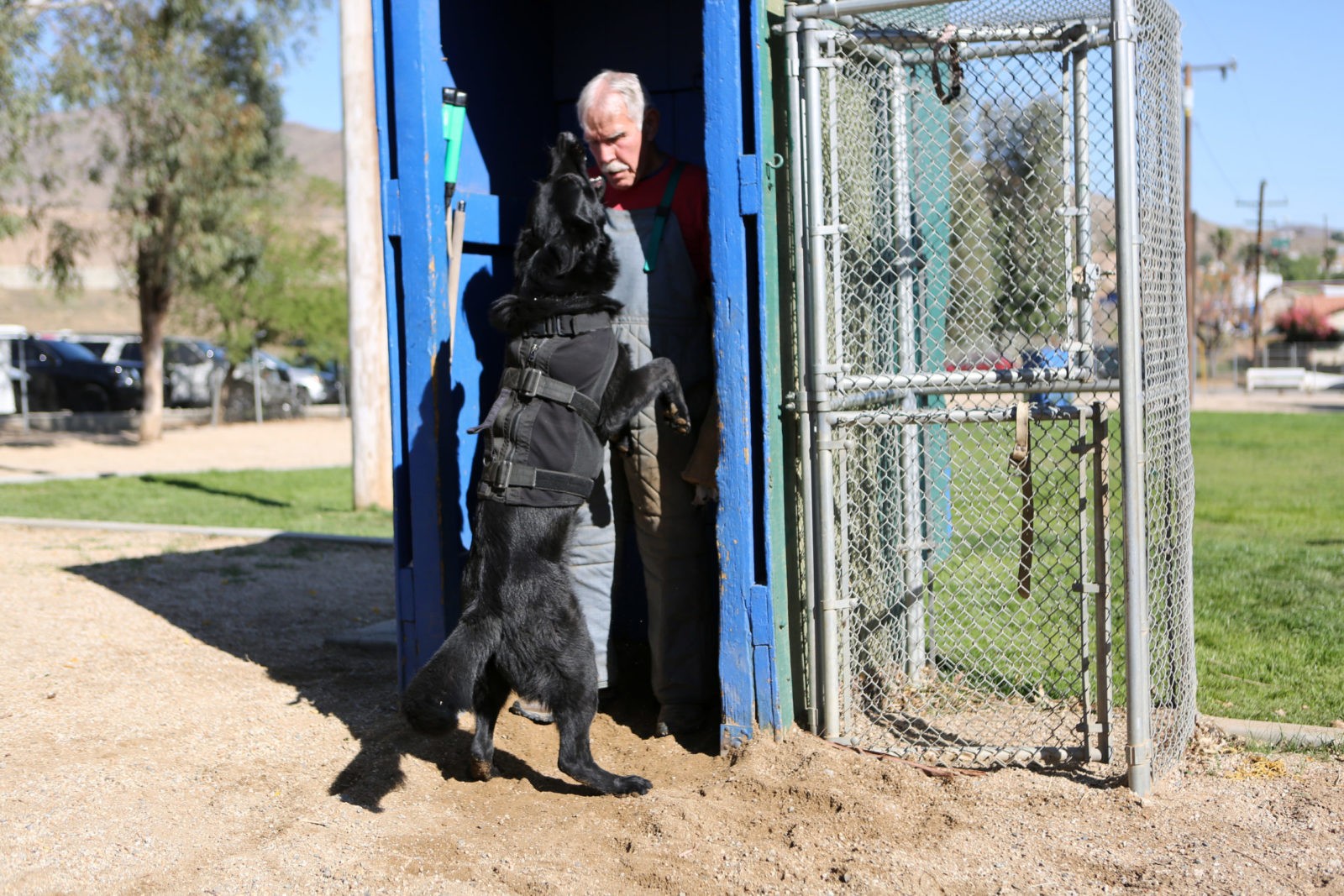 Viewed From the Behavioral Science Perspective

As an individual who began my canine education in Europe some 40 years ago I accepted many concepts from old masters. The goals in training being to pass an examination for man & dog. The testing process was, and still is, used to measure a dog’s worthiness and a human’s ability to instill certain controlled behaviors in a not always cooperative canine. The exams addressed both police and sport dogs and have been in place since the beginning of the 20th century.

My initiation into the world of police dogs came about in 1975. Using knowledge I learned training sport dogs and looking to European police agencies for direction, I introduced concepts and techniques that were new to this country. One of which was “guard & bark” training for a police service dog. Initially I had very little knowledge of the rights of a person who choose to hide from the police, so my use of the guard & bark technique had less to do with liability than with efficiency.

Using European history as well as dog training techniques I concluded civil rights did not exist in most of Europe, certainly not in Germany, during the first half of the 20th century, yet the guard & bark was taught to police & military dogs almost exclusively! This fact alone was enough to rouse my interest, if only for the historical content.

My research took me to a study of comparative psychology as relating to animal behavior. The first person to show a scientific interest in this field was Charles Darwin. His early works include “Origin of Species” (1859) and “Descent of Man”(1871). These works caused many to admit the study of animals could shed light on the abilities of man. Thus was born the concept of comparative psychology. This science is still evolving and can be quite complex for a layperson to comprehend. Fortunately, only the basic concepts are necessary for our work. These include classic and operant conditioning and the relationship between a conditioned stimulus and a conditioned response.

Most concepts and facts concerning conditioned stimulus/conditioned response behavior were first introduced during the latter part of the 19th century by Ivan Pavlov In Russia. Other notable scholars in the field were J.B. Watson and B.F. Skinner. While many other scientific minds studied this phenomenon a study of their (Watson & Pavlov) experiments would suffice for our conditioning of dogs.

My definitions and examples will be a very basic form of the sometimes quite complex subject. I am a dog trainer, not a scientist.

“We are in luck if, in training a dog we can use his instincts as a basis for what we require. For the more instinctive an action is the more reliable it will be” -Konrad Most

A simple definition of classic conditioning is, it would appear to be voluntary to the dog. There is little or no stress involved. In early experiments involving laboratory rats it consisted of a rat negotiating a maze primarily through trial and error until the end is located and a food reward is consumed. The rat eventually memorizes the maze and can eventually traverse it without making one wrong turn. However, when presented with a different maze he must learn it again. The trial and error is repeated until success is his. He is able to reward himself with little or no stress applied. The behavior is totally self-rewarding. The only benefit to the human is a study of animal behavior.

An analogy to the above scenario would be a dog conditioned to search a building (maze) until he locates a person. No stress or compulsion is present, so he bites the person (suspect).
Two basic elements missing are stress and a reward system for the dog that also benefits the handler.

Subjecting a dog to stress, closely followed by a satisfaction of a drive, teaches the dog how to handle stress while insuring we can put compulsion on the behavior we are shaping. If behavior is shaped absent stress (compulsion) it becomes far less predictable. Even play drive should be shaped with compulsion.

Shaping a behavior simply means all other behaviors are neutralized when the handler issues an order. Example: when ordered to sit the dog is not allowed to lie down, or exhibit any other behavior but sit. Even a delay in displaying the behavior should not be tolerated.

“In the absence of compulsion neither human education nor canine training is feasible. Even the most soft hearted dog-owner cannot get on terms with his idolized favorite without some form of compulsion” –Konrad Most.

Along this school of thought how much of our protection work, or biting is reflexive behavior or a conditioned response? There are valid arguments on both sides. For our purposes it is as much semantics as scientific fact. Ie: how much of the behavior is classic conditioning vs operant conditioning. Regardless of individual views on this subject the end result for a police service dog is the same. If we accept prey behavior as the basis for bite work, and this behavior is innate, then we more approach classic conditioning as our task. Further thoughts on the subject raise the question of barking prior to a reward of a bite is a responsive or a reflexive behavior.

Equally as important, the CR is weakened when the CS is used for more than one CR. While we almost certainly would not intentionally weaken the CR, if the dog were able to seek his goal absent the CR he will do so.

How does this relate to the guard and bark controversy? The CS is a stimulus given to the dog that he then relates to an opportunity to bite. The CR is the task he must perform to earn that bite.

The more bites he receives absent the CR, the weaker the response becomes. The important lesson here is, once a CS-CR relationship is established the dog must continually earn the CR. Every CR given freely (not earned) weakens the CS-CR relationship.

The concept seems to be in place with most handlers and trainers with detection dogs. Seldom do we see a detection dog that has more then one response to an odor. The CR is the reward for finding and alerting on the odor. The CR must be timely and exact each time.

The same handlers then deploy a patrol dog to search for people. In this case he does not train his dog to “earn” a bite by a consistent alert schedule. Thus, the “alert” vary in type & frequency. These handlers frequently have to maintain eye contact with their dogs to insure that they observe the “alert”.

When the desired response is not consistent, your ability to read your dogs alert is greatly diminished. The suspect he can “almost” get to may illicit a better response then the suspect behind a door, or otherwise deemed by the dog as situation where a free bite is not forthcoming. Based on prior experiences the alerts will vary. (Read inconsistent). While a CS-CR relationship maintained more then 90% of the time would not produce a perfect dog, it will certainly insure a more reliable (consistent) dog.

Operant conditioning then becomes a near perfect way to shape behavior. Behavior cannot be considered properly shaped unless you can demonstrate it 90+% of the time.

While I can understand that persons with little or no experience with dog behavior, may view the difference between behaviors (guard & bark vs. search & bite), from an anthropomorphic perspective it baffles me that a true dog trainer with an understanding of basic dog behavior would not insist on a proper CS-CR relationship in all aspects of conditioning (training) dogs to perform at an expected much higher level than is demanded of a sport dog.

The CS-CR relationship also has a conditioned time frame. Once the proper relationship is established and the dog learns he will receive no free bites we have to condition the time fame for the behavior. This is accomplished by sequential exercises until the time frame is adequate. Typically this would be 100+ barks. The safety relationship to both officers and suspects is enhanced when you have the proper CS-CR + time relationship.

While I have only discussed the CS-CR relationship here there are other behavioral considerations that may be enhanced using good helpers and established guard & bark techniques. These include transitional and confrontational training. Using skilled agitators can condition the dog to focus on the man, not the “equipment” while enforcing guarding behavior. When done properly a good dog very quickly begins to focus on the man as opposed to the equipment. This technique has to be demonstrated in person to be appreciated or accepted.

The courts have given us virtually no direction on deployment techniques, which is a positive point. We are far better of not having the courts mandating deployment policies. Judges (attorneys) would then make the decisions as opposed to animal behaviorists (Dog trainers).

The DOJ has recommended (ordered) some agencies they investigated to adopt the guard & bark method of deployment, so we have people participating reluctantly. When presented properly handlers soon realize the behavior they felt would diminish their dogs willingness to engage a suspect has enhanced his desire to focus on the man, I recently obtained on the Internet a PhD thesis on the guard & bark/search & bite theories. While it was very comprehensive (200+ pages), it did not address the primary reason the technique should be utilized.

Training dogs to perform in law enforcement is probably 70-80% observed phenomenon and 20-30% science. If you ignore the CS/CR relationship your scientific approach is a considerably lower number. Viewed from a scientific behavioral perspective the guard & bark becomes the most efficient method of police dog deployment!

To be successful in any conditioning or behavior modification you must insure the desired behavior is exhibited by the dog a minimum of 90% of the time!