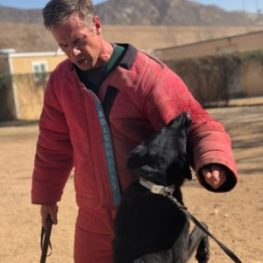 His fundamentals for dog training were laid at an early age.

By 8 years of age he had obedience trained several young dogs.

At 14 years of age he made several procurement trips to Europe. These trips included assisting “Adlerhorst” as a pioneer in Eastern European procurement. He was not simply an observer. Mike handled dogs on Frequent breaks for the already procured dogs.

Age 18 he enlisted in the U.S. Army. One of his assignments was with the 1st Armored Division in Germany. During his 3 years in Germany he participated in Schutzhund training in local clubs.
He also met his father during procurement trips, to assist in testing and procurement.

As an Infantry Sergeant Michael was part of the initial deployment to Iraq.

While in Germany he met and married his wife.

After 6 years Michael was discharged and returned to “Adlerhorst” in 2005.

As “full time” Police Dog/Handler trainer his accomplishments are numerous.

During 2006 Michael conducted several courses for the Canadian and German Military Units.

In 2010 Michael trained the first Mobile Odor Dogs in this Country for LAX Police.
During this period Auburn University was “studying” the feasibility of deploying explosive dogs on moving people in an airport facility. Michael accomplished the task while they studied.
The Lax are “Full-Service Dogs” to date….no negative statistics!!

From 2011 to 2016 Michael was a contract trainer for Tier One Military Units for the U.S. and several foreign military units. This included several deployments to combat zones.
Foreign contacts include units from Canada, England, Germany, Norway, Denmark, France and Poland.
In most cases this includes procurement of dogs as well as training.

Additionally, the FBI SWAT team trained and procured dogs from this source as well.

2016-2017 John Hopkins University contacted Michael based on their investigation for programs similar to LAX. This is an ongoing relationship.
2017 Harris County Texas and Texas A&M were tasked with providing explosive dogs for the Super Bowl in Houston. Michael provided this service.

While Adlerhorst has been successful in the field as well as the courts, Michael has brought his world wide experience to upgrade our training as well.

This includes our Patrol as well as Detection Courses.

Our procurement is also still very personal. The procurement trips are done personally. Mike is making 6-8 trips a year to visit clubs and European Vendors.