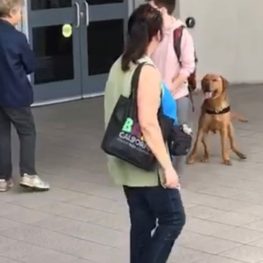 What is this course for?

Adlerhorst mobile odor detection dog (AMODD) program is an advanced class that requires the utmost commitment and dedication from its handler and respective department.  This class will allow your departmental canine to search on and off lead while searching large crowds for explosives.  This course encompasses everything included in our explosive detection course allowing the canine team to deploy as a mobile odor detection dog or to complete more basic or static searches as well. The canines are neutral to environmental distractions such as service animals, small children, etc.  Adlerhorst started its AMODD program in 2009 and currently has AMODD canine teams working for the San Diego Police Department, Los Angeles International Airport Police, Harris County Sheriff, and Texas A&M University Police Department. This is a specialized class offering comprehensive training and practical skills for today’s current threat atmosphere.  The course will include but is not limited to: proper canine deployment as an effective counter-terrorism tool, explosives familiarity and safe handling, good search pattern practices, understanding conditioned responses to target odors, and good maintenance training habits.

Training is a Three-step Process.

The difference between AMOD-D training and traditional explosive detection training is training the Canine to view people as potential carriers of odor. Most conventional explosive detection Canines, only search for static threats. AMOD-D’s can not only search and locate static threats but they can also search within large, densely populated areas (airports, convention centers, shopping centers….). The added benefit of an off-leash, away from the handler, capability enhances the Canine’s chances of locating someone concealing contraband on their person.

The most challenging aspect of training an AMOD-D Canine is conditioning the Canine to gravitate towards humans in a nonintrusive manner. The Canine must search inside someone’s “bubble” without making offensive contact. This issue presents itself in the pre-training phase. By using a behavioral marking device and knowing the threshold of the targeting odor, a Trainer can communicate to the Canine the expectable amount of intrusion needed to search an individual.

The added benefit of having a large pool of Canines selected prior to the pre-training phase ensures undesirable canines can be washed out of the program. From identification of this issue to rectification or expulsion from training usually takes two days.

Past Performance and References

Call (951) 685-2430 or Email Mike Reaver at mreaver@adlerhorst.com for additional information.