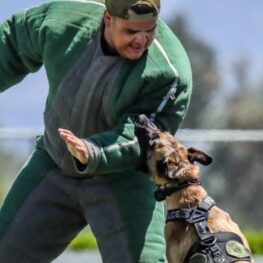 This course is California P.O.S.T. Certified

Certification and Re certification of Police Service Dogs in California.
Adlerhorst certified their first PSD in the mid 1970’s. California did not have a mandatory or suggested standard at the time.

We did however recognize PSD skills require on going training as well as periodic testing and certification to maintain a desired skill level as well as documentation for court.
All of our clients agreed and complied.

I personally approached California P.O.S.T. in an attempt to work with them as well as other agencies with PSD’s.
They were not at all interested.

Having lived in Europe in the early 1960’s I was involved in dog sports that closely parallel conditioning dogs for Police Service.
By far top sports people possessed far more skill then the police counterparts. However, I felt a strong certification geared to law enforcement was necessary.
To that end, I selected what I felt was the best European Police Certification for our clients.
The test we adopted, and still use today, with some modifications, is the standard we use today. That standard was, and still is, the standard used by the state of North Rheinland Westphalia.

The standard is on our web page.

In 1983 Riverside County Sheriff’s Department added at Canine Unit to their agency.
Ben Clark was the Sheriff. P.O.S.T. owed a debt of gratitude to him due to his strong promotion of P.O.S.T. in its early years.
We wrote, and he submitted to P.O.S.T. a 24-hour class that evolved to our recertification.
This class includes a legal update presented by an attorney, as well a Canine health class, instructed by a Veterinarian.
Approval was immediate!

This course is still in place today.
It is a Plan 2 P.O.S.T. class!

In 1989 P.O.S.T. finally formed a committee to set a recommended minimum standard. The standard was and still is, ridiculously simple compared to our 3-day class.
Adlerhorst is prepared to offer the P.O.S.T plan 2 courses (24 hours) or an abbreviated version 16-hour version.
The cost for the P.O.S.T. plan 2 class (Plan 2) is $264- enrollment is done through the Riverside Sheriffs Department 951 486 2860.
Adlerhorst can schedule the 24-hour class a frequently as necessary.

Cost is $400-
The difference in price is based on the 24-hour class is subsidized by the State.
Also, bear in mind, all the State Standards are simply recommended, not mandated!
Any questions, call our office.